Life in the Dark, Electronic Warfare

PREVIEW: Noir and the Lentigo Ginger, Goldie, Host 3 Stories of Adventure and Horror.

Three Tales of Terror, Hosted by Noir and the Lentigo Ginger, also known as Goldie and his girlfriend.

NOIR AND THE LENTIGO GINGER

Young Goldie, stay in that sinkhole it’s the best you’ll have it. That’s the advice I would have given my younger self. That smooth pink nose was so shiny. How did I end up looking like this, with black spots?

I was slapped in the face by so many pretty felines that my nose turned black and blue. Not true.

Truth is I’ve had one girlfriend, Noir.

The spots on my nose and lips, they slowly appear on ginger cats. A medical condition called Lentigo makes changes in the pigment in my skin on my pink nose and lips. I’m eleven years old. My family album shows my changing face with my changing family.

I like to tell people the changes appeared after each dangerous adventure our human took us into. It makes it easier for you to find your ginger should he get lost! Keep your pictures updated! Most gingers are guys, but my mom was ginger. She’s a beauty.

French for dark or black, Noir was trapped so she would stop living under a house that had been raided by animal control. They confiscated the dogs in the house.  The cats were starving and sick from eating leftover dog food. Their human had a heart attack sometime after the dogs were taken.

Noir is dark and lovely. Her entire body is a perfect design. I think she was painted by Cleopatra’s makeup artist. They said Noir was TNVR’d, that’s Trap Neuter Vaccinate Return, but Noir wasn’t returning.  Neither was she going outside.  After about a year of hiding in the house, she ran out of toys to hide with and wanted to play with me

When I was born my human said, “He should be in pictures”.  That was when my mom, Purl, was licking the afterbirth placebo off my golden hair. Women did anything to be with me and my dappled orange belly. You’ll see when I turn over.

Sister Silver was born long after my other 5 siblings. The human called her a runt. She could imitate anything you did.  After she learned to turn doorknobs from our human we had run of the house.

When she was born everyone who saw her picture or met her told my human, “I want to adopt her”.  She and my sister Basset learned tricks to show off at the adoption shows. My human mom had plans to get them good homes through the local No Kill Shelter.

Adoption didn’t happen like it was supposed to. I went with them to say goodbye to the girls.

Silver was sitting on my back to see out the car window. As the human came back without Basset, Silver reacted to big dogs barking. Both my sides had cat nails digging into them. She didn’t want to let go but the papers were signed.

I drove home with the human crying and swearing she was going back to buy them back. My chances of extra wet food went to the pawn shop with Grandma’s German beer mugs.

In a couple of days both sisters were back home, but goofy like they were on drugs. That’s why the human’s brother was yelling her name on the patio when Basset wrapped her neck around a rope handled bag, choking herself.  After she was unwrapped, I put both my paws around her.  I held her close to my belly, she slept quietly for hours. That was the last time we did that.

We attribute this incident to the later inability of my sister to answer any of the commands or requests of my human, or she is dumb. If the human wants to give us treats we purr and knead the ground she stands on. Basset, named after an Egyptian goddess, does it the other way around. She turns her nose up and demands the human’s food.

Practice doing nice things for your sisters, it’s easier to get a girlfriend.  Noir told me that. Turned over to show my belly. My sister is letting me use her as a pillow.

How many times have you heard that kittens have blue eyes the first month of their life? That’s in every book about kittens. They don’t tell you how hard it is after you aren’t cute to get treats or adopted.

Dark times followed my family and friends, some of them died. What follows here are three tails of a ginger cat family, dark stories told by my human.  Hosted by Goldie and Noir, for mature minds. 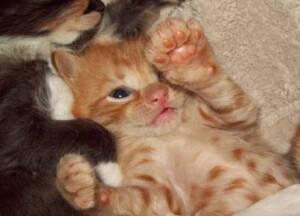 No comments to show.

Theme by Anders Noren — Up ↑